Calisthenics mean exercising with your own body weight, by using it as resistance in movements, usually without external weight equipment. It is well suitable method for everybody in need of developing their physical abilities and abundance, as it focuses to entire body as well as specific areas.

Calisthenics roots has said to reach at least to the time of ancient Greece. A term of Calisthenics become from words “kállos” – beauty and “sthénos” – strength, might or power. Famous Spartan warriors and also athletes of original Olympic games used methods of Calisthenics in their training routines. Of course exercises of that time have been different from these days, but principals stay mostly. As time passed centuries, were Calisthenics slowly spread out through the world.

More near in our time, on the 19-century Calisthenics had own popularity especially among military training or those who were going to military services. Rescue workers are familiar with Calisthenics as well, as the picture of the work demands good physical fitness. Firemen, police forces etc. And let’s not forget different institutes as schools or prisons. Calisthenics is also part training of martial arts and is used on wide range in sports.

For whom Calisthenics is meant to

We all live in the world of very different kind of situations and we all are unique in our own strengths and abilities. Common for us all is, everyone can increase their fitness and abundance. No matter if you are old or young, if your purpose is to lose weight or gain weight, to getting better base fitness or to fixing your posture or perhaps developing confidence. Calisthenics is well suitable training method for all in need of increasing their base fitness or to stay in fit. It fits well to exercise as group oriented with or without lead or alone.  Calisthenics develops greatly body control, muscular strength, explosiveness, and endurance. Method is a healthy way to exercise as done with common sense.

To start your Calisthenics training, money will not be a problem, as you don’t need actually any equipment investment or expensive gym memberships.

means a difficulty level in a view of the beginner)

Here is the most common exercises for Calisthenics training. On different body angle and hand-/grip-widths can intensify or reduce the training effect. To be able to perform more challenging movements, has to make usually progress on lower level movements at first. I did add youtube-links to presentations, which I feel giving more specific information and demostrate movements better than just pictures or a text. Reason to not embed videos is to keep the site as faster.

– Strengthen greatly area of upper body. The mostly chest, shoulders and triceps. Tension in body position also strengthens entire core. One of the best and most used movements for torso. Notice huge amount of variations!

The Perfect Push Up | Do it right! 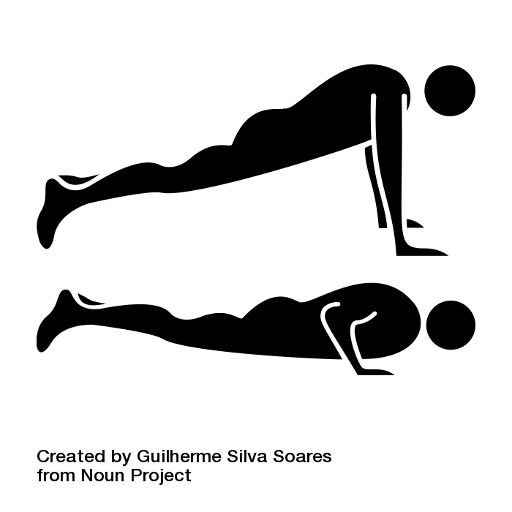 – Movement: Starting position is as plank, keep body straight, tightening your abs, weight on straight arms and toes. Now elevate your body on arms, until elbows are in sharp angle, chest is inch or two from the floor. Next push and straighten your arms back as body  stays all-time straight. Repeat.

– Strengthen back (latissimus dorsi and its supportive muscles), biceps and shoulders. Pull-up happens on counter-grip (palms point away from puller). In Chin-up palms meet the puller in grip. Chin-ups are easier to execute for beginners.

The Perfect Pull Up – Do it right!

– Movement: Start is hanging position, arms fully straightened. Try different grip widths, which is the most natural for you. Pull yourself up until arms are about 45 degree angle and your chin over the bar. Next lower your body slowly back to start position. Repeat.

The Perfect Dip – Do it right!

– Movement: Lean slightly forward, hold yourself hands on bars, arms straightened. Now lower your body down until your arm-elbow line makes about 90 degree angle. Keep tension all-time and push yourself back up. Repeat.

The Perfect Squat – Do it right!

– Movement: Stand legs fully straight, soles firmly on floor, feet are about on width of shoulders, hands can rest on back of head, elbows on both side. Now lower your body as trying to sit. Go as far as come to the point when thighs are horizontally in same line with the floor. Hips goes just a little lower than your knees are. Keep your back as straight as possible an entire movement. Push slowly back to the start position on using your thighs and ass muscles. It is easy to come up on using your back, but that does not benefit right areas. So avoid it and keep your back as straight.

– Strengthen middle body (abdominals or shortly “abs”), develops posture and body control.
Unfortunately this movement splits likes/dislikes as Sit-ups also.
May put some strain and stress to lower back and neck. 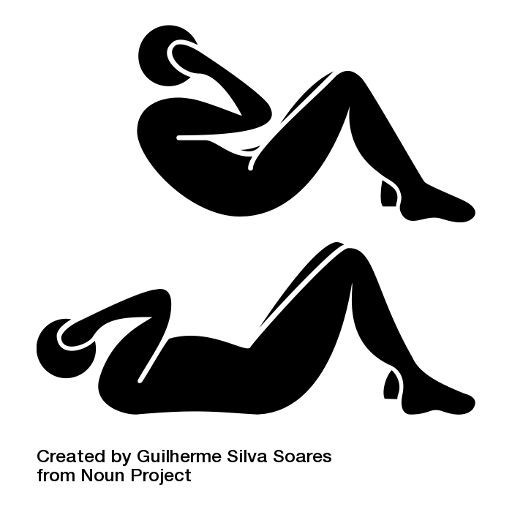 -Movement: Lay on your back. Your eyes on ceiling, knees are bent to form pyramids and soles are firmly on floor all the movement (most likely they will rise). Hands are holding on back of your head. Now crunch your body using your “abs”. Not to your knees but just to lift up about half the way or less. Only upper back lifts up from the floor.  Then lower your body slowly back to start position. Here is important to not use arms or head in rising, just use your abs. Keep tension up, but avoid tensing your neck or shoulders, so no aches and stuck appear in wrong places. Repeat. 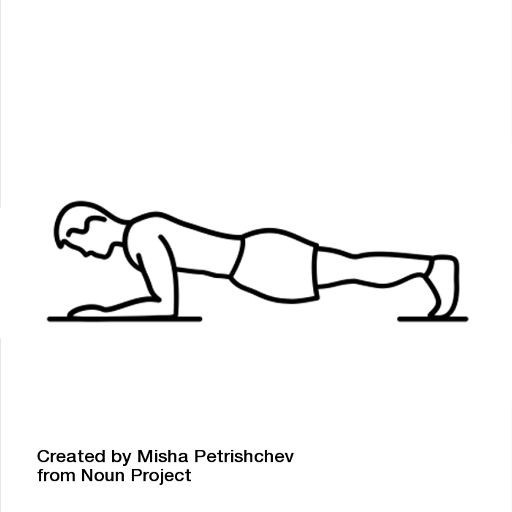 ! Try to stay in position good amount of time until it feels that cannot more. as 30-60sec. (Beginner could start much lower like 15 second or so.)

– Movement: Starting position same as in push-ups but upper body weight is on forearms – lean to floor. Keep body in straight line, tense your stomach, not letting your back curve or plump out. Tense your blades together so shoulder not go up to your ears or hang on too low. Tense your buttocks and keep knees out from floor. Important in this static movement is, it feels in middle body and not hurting your back.

How to Do Leg Raises

– Movement: Lay on your back on training surface. Body fully extended to the ground (heels, back, head). Feet are together, hands can lay on sides or can keep them on far over your head. Elevate your legs and raise them from hips in straight line to the point of about 90 degree until feet point to the ceiling. Slowly lower your legs down controlled, until in starting position but not touching the ground. Repeat. Knees can be slightly bent when making this exercise.

How to Do a Lower Back Extension | Back Workout

– Movement: Lay on your stomach on training surface, body fully extended. Hold your feet full-time on the ground and hold your hands back of the head, elbows wide on sides (or arms can be far front, fully straightened). Elevate your torso as far as it feels okay, then lower controlled slowly down. Repeat.

– Strengthens entire upper body. Can perform on the bar or on rings.

How to Muscle Up (Full Tutorial)

– Movement:  Starts on pull-up grip (palms point away from puller). Pull-up yourself radially on explosive movement (swinging pull-up) to the point where the bar approaches your upper chest, then wrists are swiftly flexed to bring the forearms above the bar. The body is leaned forward, and the elbows are straightened by activating the triceps. Movement ends to the point where bar is on the level of the waist, arms straight and upper body in vertical line, slightly leaning forward. To repeat the exercise, the arms are bent at the elbow and the body is lowered to the starting point.

– Movement: As name says, purpose is to bring legs to horizontal line as torso stays on vertical and hold this position.

– Strengthens your entire body. Especially an areas of core and upperbody muscles. Quite impressive static move. Can perform on the bar or rings. Move happens as static, so holding position without repeats is in main role. Front lever is one of the progress moves, meaning you can develop towards actual movement on eased variations and/or by strengthening certain areas. One of variation is to hold knees toward chest which makes things easier (Tucked Lever).

– Movement: Hang on bar on your palms away from you, thumbs meet. (pull-up grip). Hold your body straight and start rising it until the body forms line horizontally. Hands stays still up hanging. Engage your arms and torso, clench your midsection, and squeeze your legs together. Keep body steady.

– Progress movements for Front Lever: All movements which increase core strength and endurance.

– Strengthens entire body. One of the most impressive static movements, which the most likely need much progress  in physique to be able to perform, means months of training. Exercise can be performed on wall bars or on a pole.

– Movement: Take a grip on your lower hand from bar, palm up. Catch on upper hand to bar palm facing down. Lower hand pushes and upper hand pulls to maintain the position. Lock your lower elbow, arm stays straight. Rotate chest out and up, open. You can lean to lower arm’s shoulder if it helps. Lift your legs up from the floor, couple times. You cannot probably keep them up and straightened more than second or two. When your physique develops, you become better in progress and can stay longer times in right position. Train the movement same amount for both sides.

Use of Youtube as a learning tool is quite amazing. No matter what a subject is, you can pretty much find everything you need. A big help for learning right techniques and fixing problematic movements.

Here is some of my favourite Calisthenics channels without order:

Δ Antranik DotOrg
Antranik is passionate about abundance and helping people to develop their fitness. He is also diligent writer with over 900 posts in his website. Posts are wide range about fitness, nutrition to sciences. Awesome!

Δ STRENGTH WARS
This popular channel is about strength battles where faces each other bodybuilders, powerlifters, strongmen, weightlifters crossfitters and Calisthenics. Athletes competes against each other as in deadlifts, squats, bench press, pull ups, dips, keg lifts, prowlers. Must see!

Δ OFFICIALTHENX
Hugely popular channel with over 1,5milj. subscribers. New videos about every day. Everything about Calisthenics training. Check!

Δ Hannibal For King
Hannibal Tyron Lanham aka HANNIBAL For KING – is known for his impressive calisthenics abilities and the physique he sculpted over years of hard work. His mission is to inspire and help people and share information.